As Private-Sector Hiring Heats Up, Public Employment Still Snowed Under

New job numbers from the Department of Labor make clear that public employment still has not recovered from the Great Recession. Businesses have been rehiring for several years, but continued budget pressures at the federal, state, and—especially—local levels have depressed public employment, which still has not broken a five-year slide. What appeared to be the start of recovery in summer 2013 ended up as a simple reflection of school years’ running longer because of last winter’s blizzards. Public employment remains snowed under. 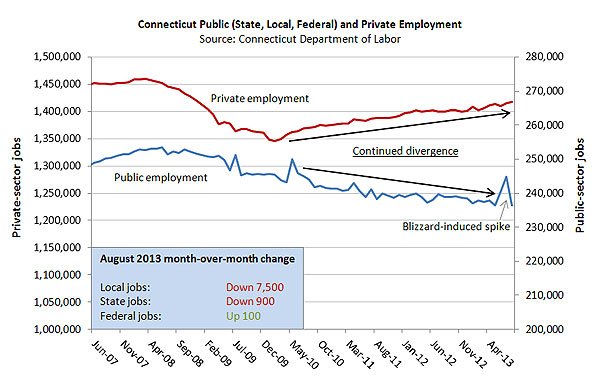 Not only do public employment doldrums undermine Connecticut’s recovery, but also they threaten vital public services. Fewer government jobs mean fewer teachers, firefighters, and police officers in our cities and towns. Public employment in Connecticut currently stands at its lowest level since October 1999, according to the same DOL figures. To preserve our quality of life, Connecticut’s state and local governments must begin to reverse years of continual cutting; otherwise, we risk hitting the next recession before we have restored funding for schools, roads, public safety, and other public goods. Not only do strong schools and safe communities make Connecticut a better place to live, but also they help broaden opportunity for all of our children. In the face of ever rising inequality, such services are crucial.