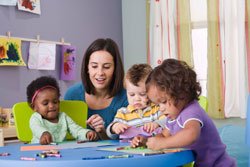 The last couple of weeks have had big implications for young children in Connecticut.  Last Thursday, Governor Malloy issued a press release stating that the State of Connecticut and the union of family child care providers had reached an agreement which would increase rates for Care4Kids, Connecticut’s child care subsidy program.  On Monday, the Governor stated that, in the upcoming legislative session, he would seek funding to expand Connecticut’s subsidized preschool program by at least 1,000 slots. And, also on Monday, the Governor announced his intention to re-introduce legislation this session that would formally create an Office of Early Childhood.

All of this is not just good but necessary news.  Our fifth annual Connecticut Early Care & Education Progress Report, which was released today, reveals that total funding for early care and education actually declined in Fiscal Year 2013 from the two previous years (adjusted for inflation), despite the abundance of evidence showing that access to high-quality early care and education settings leads to improved outcomes in school and life.  Additional investments in programs that serve young children are warranted, and the investments proposed during the past couple of weeks make sense.  Care4Kids rates have not been raised since 2002, which means they are so far below market rates that parents receiving Care4Kids have a hard time finding high-quality programs that will accept the subsidy.  And although the number of state-subsidized preschool slots has been steadily increasing over the years, the quantity of slots is still insufficient to meet the need.   Our data analysis finds that less than 17,500 3- and 4-year-olds in Connecticut are receiving some form of accredited state-subsidized early care and education, though more than 43,000 3- and 4-year-olds are in financially struggling families who earn less than 75% of the State Median Income.  More high-quality slots are clearly needed.

To achieve the high rate of return that we know investment in young children can yield, we have to invest, which is why this proposed new funding is so welcome.  But we have to invest wisely, which is why the creation of the proposed Office of Early Childhood is equally critical.  The creation of this new Office is a response to the concerns raised by parents, providers, and advocates over the years – and repeated year after year in our Progress Report – that Connecticut is a state that is program-rich but system-poor when it comes to serving our youngest children.  Our current patchwork approach does not serve families or children as efficiently or effectively as it could, meaning that child care providers struggle to manage multiple funding streams and regulations, and parents struggle to navigate a confusing array of programs and eligibility requirements.   The proposal to formalize the new Office in law would not only bring the funding streams that serve young children, historically dispersed across multiple agencies, under one roof, but would imbue the new Office with the power to reform current practices, so that all families have easy access to high-quality programs, providers can pay wages sufficient to attract and retain highly-qualified staff, and we can evaluate outcomes to identify and replicate best practices.