A Better Measure of Poverty in Connecticut and Its Lessons

Yesterday, the U.S. Census Bureau published its estimates of the Supplemental Poverty Rate for every state and the nation. The report shows that around 441,000 Connecticut residents do not earn enough to meet their basic needs, and that the high cost of living in our state likely contributes to this problem. However, the report also provides evidence that public programs for children and families like the Earned Income Tax Credit and the HUSKY health insurance program are helping to lift many children and families out of poverty, helping them to meet their full potential and help build a stronger future for our state. 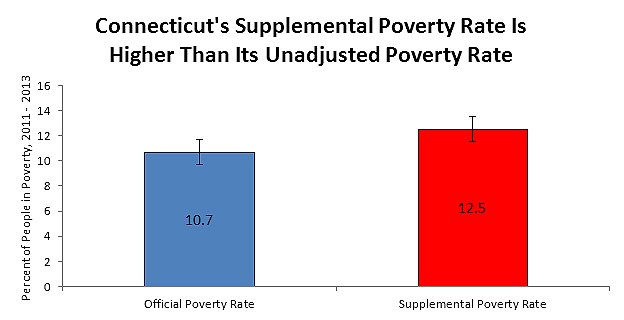 While the Census Bureau doesn’t publish supplemental child poverty rates for each state, the data it provides for the nation as a whole tells a compelling story about both the unmet needs of our children and about the power of public programs to lift children out of poverty.

In 2013, the supplemental child poverty rate for the United States was 16.4%, but the official child poverty rate was 20.4%. What accounts for this large discrepancy? Recall that supplemental poverty includes non-cash benefits and transfers, as well as cash income. Some of the most important anti-poverty programs for children – the federal Earned Income Tax Credit (EITC), the Child Tax Credit (CTC), and the Supplemental Nutrition Assistance Program (SNAP, formerly “food stamps”) – all provide non-cash benefits that do not show up in the official poverty measure.  Supplemental poverty data from 2013 show that:

Public programs in the nation and in our own state keep the power on and enable families to secure food for the table.  Every child that these programs lifts out of poverty is a child less at risk for health, school, and future work problems.

The supplemental poverty data shine light on which costs of living provide the heaviest burden on low income families.  The unavoidable expense that most impacts the child poverty rate is out-of-pocket medical expenses.  In 2013, medical costs drove approximately 2.3 million children around the country into poverty, as determined by the supplemental poverty measure. This is a particularly important finding, because we know that the best medicine for out-of-pocket medical costs is health insurance. These findings illustrate an important but under-appreciated role of Connecticut’s HUSKY program; in addition to providing access to needed medical care for 470,000 low-income children, parents, and pregnant women, the HUSKY program likely helps keep many of these people out of poverty as well.

The takeaway from these new data is two-fold.  First, in a state known for its high median family income, nearly one out of every eight children is growing up in a family that’s struggling to make ends meet.  Second, strategic public policies are effective in helping families meet the basic needs of their children.

We know that children do well when families do well.  We know that communities thrive when the families that live there succeed.  And now we know that smart, public investments like the EITC and the HUSKY program are helping thousands of Connecticut families to meet the basic needs of their children, helping our state as a whole better prepare for the demands of tomorrow.