Connecticut’s Income Inequality in Stark Contrast to Its Prosperity

This blog was first published at the CT Mirror’s CT Viewpoints Website.

In the economic expansion following the great recession, the top 1 percent in Connecticut enjoyed exclusive benefit from all income growth, compared with 85.1 percent of income growth enjoyed by the top 1 percent in the United States as a whole. That is one of the findings in Income inequality in the US by state, metropolitan area, and county, a new paper published by Mark Price, an economist at the Keystone Research Center in Harrisburg, PA and Estelle Sommeiller, a socio-economist at the Institute for Research in Economic and Social Sciences for the Economic Policy Institute’s (EPI) Economic Analysis and Research Network (EARN). 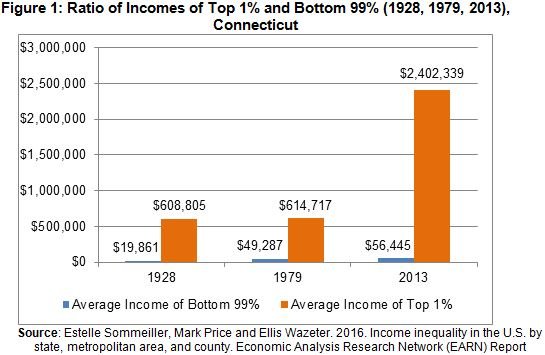 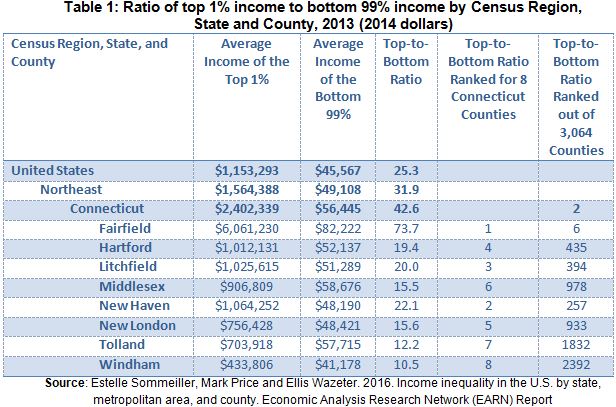 Connecticut Voices for Children has illustrated the yawning socio-economic gaps in this region of the state. Within this metro area, poverty rates for children are nearly 23 percentage points higher for children in Bridgeport than they are for their peers in Stamford. Within Stamford itself, poverty rates for black residents are more than 16 percentage points higher than they are for whites.

Connecticut’s standing as one of the most prosperous states is at odds with its dubious distinction as one of the most unequal. Just as policy choices contributed to today’s dramatic levels of inequality, so too can policy choices (national, state and local) begin to tackle generational poverty and restore the American promise of economic mobility. Consider, for example, the revenue forgone by our state under the current tax system in which the bottom 95 percent of Connecticut households pay an effective tax rate of 11.3 percent while the top 5 percent pay a rate of 8.5 percent, resulting in a loss of more than two billion dollars in state revenue annually (see Figure 2). 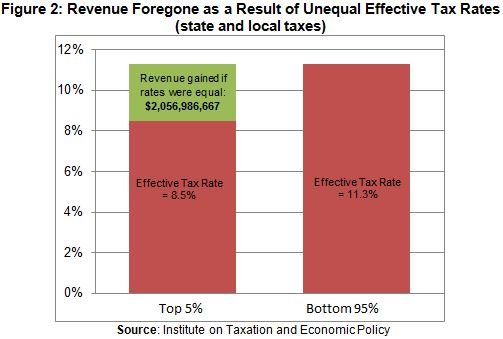 By adding fairness to the state tax system, lawmakers could begin reinvesting in education, infrastructure and other smart investments to grow the state’s economy. Strategic investments would in turn increase opportunity across the state, enabling a return to a more democratic economy with a growing middle class and shared prosperity.