If you read what some commentators are saying about our state, you might think that Connecticut having one of the nation’s highest standards of living is just an accident. To mark the anniversary of the income tax last month, observers presented a story of doom and gloom entirely attributable to state income taxes. 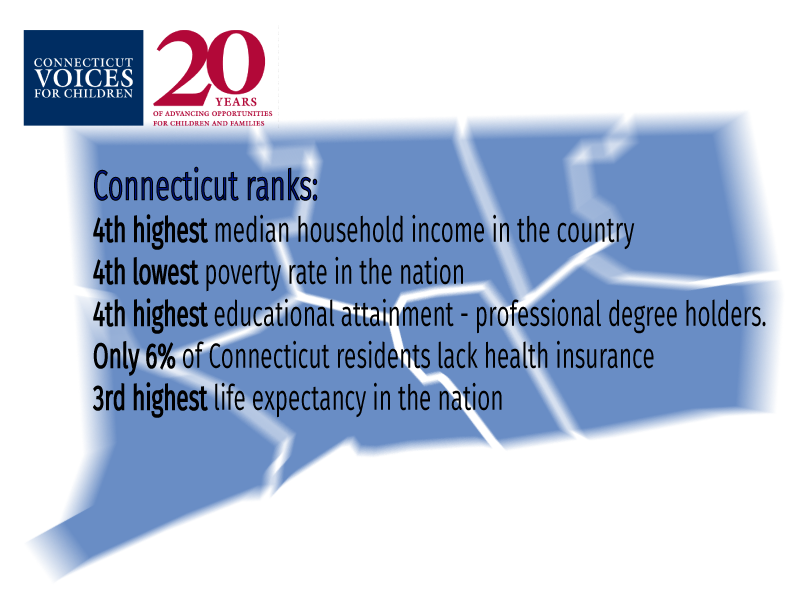 What these columns are missing, however, is any thought to what those taxes translate into in terms of services, investments and economic prosperity. Grover Norquist, for instance, pointed to Texas and Florida – which have no state income taxes – as examples of what states can accomplish if they liberate themselves from the responsibility of investing in the future. Well, let’s take a look.

The poverty rate in Connecticut is fourth lowest in the nation. In Texas and Florida it’s much higher. Connecticut is fourth in the share of the population holding a graduate or professional degree. Florida and Texas are well below the national average. In only three states do a higher percentage of people lack health insurance than in Florida; one of them is Texas, which leads the nation in this shameful statistic. Meanwhile only nine states have a lower share of people without health insurance than Connecticut. You get the point. Connecticut may have higher taxes, but that is because the state invests in the services essential to sustained economic success.

If Connecticut were to follow a low-road model, it would jeopardize the competitive advantage it has in a highly educated and highly productive workforce that is attractive to high-wage and high-skill employers, who in turn benefit from a return on the investment of their business tax dollars in the form of roads, bridges, and other public infrastructure, safe neighborhoods, and education.

But Norquist and other commentators are not just wrong about what makes a state’s economy strong; he also errs when he and others claim that taxes in Connecticut drive residents to leave.  Norquist inaccurately characterizes a net loss of roughly 8,000 households per year as an escape from the state income tax. In fact, net annual movement from Connecticut declined steadily in the first 10 years after the tax was enacted – hardly consistent with Norquist’s argument. And, more than eight in 10 of the households that left Connecticut between 1992 and 2014 were replaced by households moving in. If taxes are as significant a driver of state-to-state moves as Norquist wants to believe, why would so many people be moving to Connecticut?

In fact, 38 percent of all residents leaving the state moved to Florida, the leading destination for virtually all northeastern and rustbelt states – including New Hampshire, which doesn’t have any broad-based income tax. Common sense says many of these people leaving Connecticut are retirees seeking warmer weather, who likely would move regardless of Connecticut tax levels.

Norquist errs again when he asserts that those who moved out of the state took billions of dollars of income with them, further depleting the state’s finances. It’s a claim that former Tax Foundation economist Lyman Stone has written rests “on an egregiously wrong use of the data” by analysts who “have either failed to perform the most basic due diligence . . . or else actively mislead their readers.”  Think about it: the vast majority of people who leave a state hold jobs that will be filled by people joining the labor force from within the state or moving in, resulting in no “loss of income” at all.

You can throw as many arguments you want against the wall and none of them stick. Connecticut is a better place to live because of the public investment that comes from everyone pitching in for the common good. Neither residents nor businesses are “damaged” by our state’s income tax. To the contrary, it’s the children growing up in poverty in states that don’t invest in shared prosperity and quality of life that will have a hard time reaching their full potential.