Thanks to everyone that attended our 16th Annual Budget Forum. We had a great turnout, including appearances by Governor Malloy, Senator Murphy, Comptroller Lembo, and Secretary Barnes. If we missed you, there are links to resources from the event below.

This week, lawmakers are meeting with their respective committee members to determine which bills to raise for public debate. We'll also be joining allies in a press conference at the Capitol to call on lawmakers to close the carried interest loophole.

Friday, 2/3 – Education Equity (12:00pm, Room 1B)
A press conference to present S.B.137, an education bill we are supporting; you can find more details bellow.

While meetings in which lawmakers meet to determine which bills to raise for public debate are not open to public testimony, you can view their schedule here and contact your lawmaker if you think a particular bills should be discussed.

There are no public hearings on legislation we're tracking yet – we will make sure to keep you posted once the first pieces of legislation come up. There are still quite a few bills waiting for a bill number or in the process of being drafted by their respective committees, so some patience is required. Once things get going they can move pretty quickly, so be ready.

Last week the Appropriations Committee soundly rejected the Juan F. settlement, a plan towards ending federal oversight of the Department of Children and Families (DCF). You can find more details on the vote here, here, and here.

One of the key elements of the proposed new exit plan is a commitment to steady funding. DCF Commissioner Joette Katz believes that with the funding proposed in the revised Juan F. exit plan, DCF can exit federal oversight within two years. However, she does not believe she can meet key outcomes, such as ensuring reasonable case loads for social workers, if there are budget cuts. Legislators expressed a number of concerns, including that the settlement would lock in funding for the Department of Children and Families in this year's budget and in future budget years.

Connecticut Voices for Children supports the settlement to ensure that there are enough social workers to adequately investigate abuse and neglect reports and to meet the needs of children under state care.

The vote is not final; the House and Senate each need a two-thirds vote against the settlement to definitely reject it. The final vote is expected February 1st.

Updates: bills we are tracking

The aim of these two bills is largely similar: move part or all of the functions of the Office of Early Childhood (OEC) back to the Department of Social Services (DSS). In theory, this would place programs like Care 4 Kids under the umbrella of a much bigger agency, potentially offering more avenues to protect their funding. Connecticut Voices is monitoring these two bills, as they represent a significant reorganization of programs and policies we consider critical for Connecticut's children and families.

The proposed bill includes, among other provisions, expanding the Birth-to-Three program, universal preschool, increasing minority teacher recruitment, lowering classroom sizes, and mentoring to improve teacher quality. We will keep you posted with any updates and hearing dates.

This bill seeks to introduce a state-wide property tax to fund education in Connecticut, based on the principle that equal effort in raising revenue for education should lead to equal funding and resources.

This might sound familiar – mainly because the framework is very similar to the Vermont property tax model, described in our recent report on this issue. The bill is currently sitting in the Planning Committee with language being drafted; we will track it closely.  For more information on how the model works, see below. 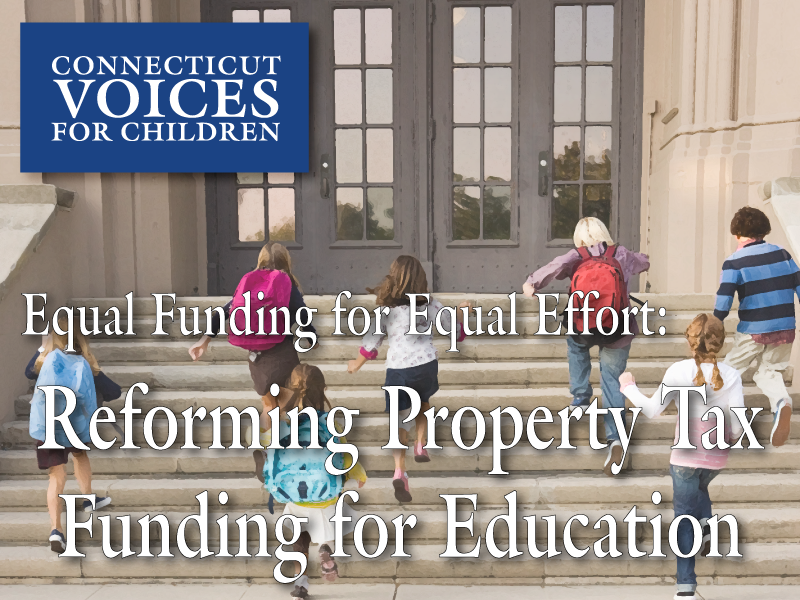 The following summarizes the report's findings, trying to keep the math at a minimum. Please refer to our report for more details.

Who gets a tax cut?

Our proposal would cut taxes for 2.7 million residents in 117 cities and towns, strengthen the tax base of our largest cities, and level the playing field so that all communities can attract jobs.

What are the the main ideas of the Vermont model?

How does it work?

First, the state legislature has to set two numbers.

With that in mind, municipalities will decide how much they want to spend in education. Their starting point will be their per-pupil spending. This figure can be either higher or lower than the state per-pupil number; it is up to the town to decide how much.

It can´t be that easy!

Well, it really is not that easy. This is what the system will look like for most taxpayers; in practice, there a few under-the-hood calculations taking place to make sure the statewide tax adjustments work.

For instance, the sequence in which spending levels are decided is a bit more complicated. The state takes into account total predicted spending, as that sets how much money they need to raise. Our model fully funds PILOT (the state program that compensates municipalities with tax-exempt property) to make the system more balanced. The model also separates residential (homestead) and commercial mill rates, with changes in municipal spending only affecting the former.

We also left out from this explanation a few complicating factors, like how the state decides on a base per-pupil spending, how spending per pupil is adjusted by need, and a few more details.

You can experiment with how the system would work on our Tableau page. Again, read our full report for more information – and make sure to send us any questions you might have. We will host a webinar on this issue in the coming days, so stay tuned.

What we are reading, Budget Forum edition

For those that couldn't make it to the Budget Forum:.