Voices from the Capitol (XVIII): A Better Approach to Budgeting

NEW BRIEF: A Better Approach to Budgeting – Concerns about the Austerity Approach of State Budget Proposals 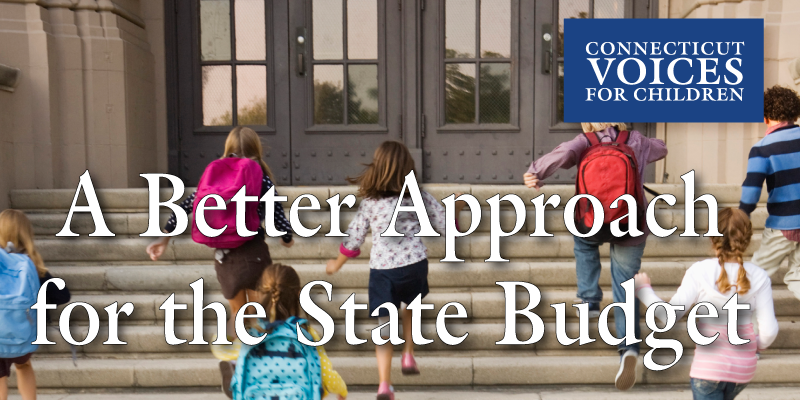 In our new report, we look at at three budget proposals from the Governor, Legislature, and Republican leadership.

The three proposals include deep cuts to crucial programs and services for children and low-income families. None of the proposals address an outdated tax code that does not align with today's economy, and all three include both tax increases for low-income families and tax cuts for high-wealth taxpayers.

Furthermore, each proposal is now out of balance following new budget deficit projections, which increased the total deficit forecast of $3.6 billion for fiscal years 2018 and 2019 to approximately $5 billion.

We expect that between now and Friday we are going to see at least three budget plans, as the Governor, Democrats, and Republican leaders update their proposals to reflect the new larger deficits.

We believe that the solution to Connecticut’s budget woes should:

Connecticut Voices for Children will continue advocating for the reforms we need to address the long-term challenges Connecticut faces. Cutting spending with no new taxes might balance the budget this year, but it will not solve our problems. What we really need now is bold action, fearing not taxes but rather the lost potential of our children, families, and communities.

Last Thursday, the Republican House majority in Congress passed the American Health Care Act (AHCA), the first step to repeal the Affordable Care Act (ACA). The bill will now be considered by the Senate.

The current version of the AHCA, in fact, is even more harmful than the initial draft of the bill that was debated in March. The AHCA included huge cuts to Medicaid ($880 billion over 10 years) and to health care subsidies in the exchanges, paid for by a massive tax cut for the wealthy, that would have led to 24 million people nationwide losing health insurance coverage. The impact of the Medicaid cuts would be wide ranging, affecting children with special health care needs in schools to individuals needing addiction treatment.

The newer version of the bill approved by the House also dramatically weakens protections for individuals with pre-existing conditions, as well as letting states reduce the essential health benefits covered by private insurance or eliminate the lifetime benefit cap ban.

The AHCA as passed by the House would have a terrible impact on the health care of hundreds of thousands of people in Connecticut. Premiums will likely skyrocket for older workers. Many people won't be able to afford coverage. Cuts to Medicaid funding will force the state to reduce HUSKY eligibility, leaving many families without health insurance.

It is likely that the Senate will introduce significant changes to the proposal, or even completely rewrite it. Senate approval is by no means guaranteed. In any case, it is time to call Senator Blumenthal and Senator Murphy´s office and ask them to stand firm in opposing the AHCA in its current form.

On May 15th from 10:00 AM to 12:00 PM, CAHS, in conjunction with the Commission on Women, Children, and Seniors, will release their new Kids Count Special Report: Race Equity in the Five Connecticuts.

What We Are Reading