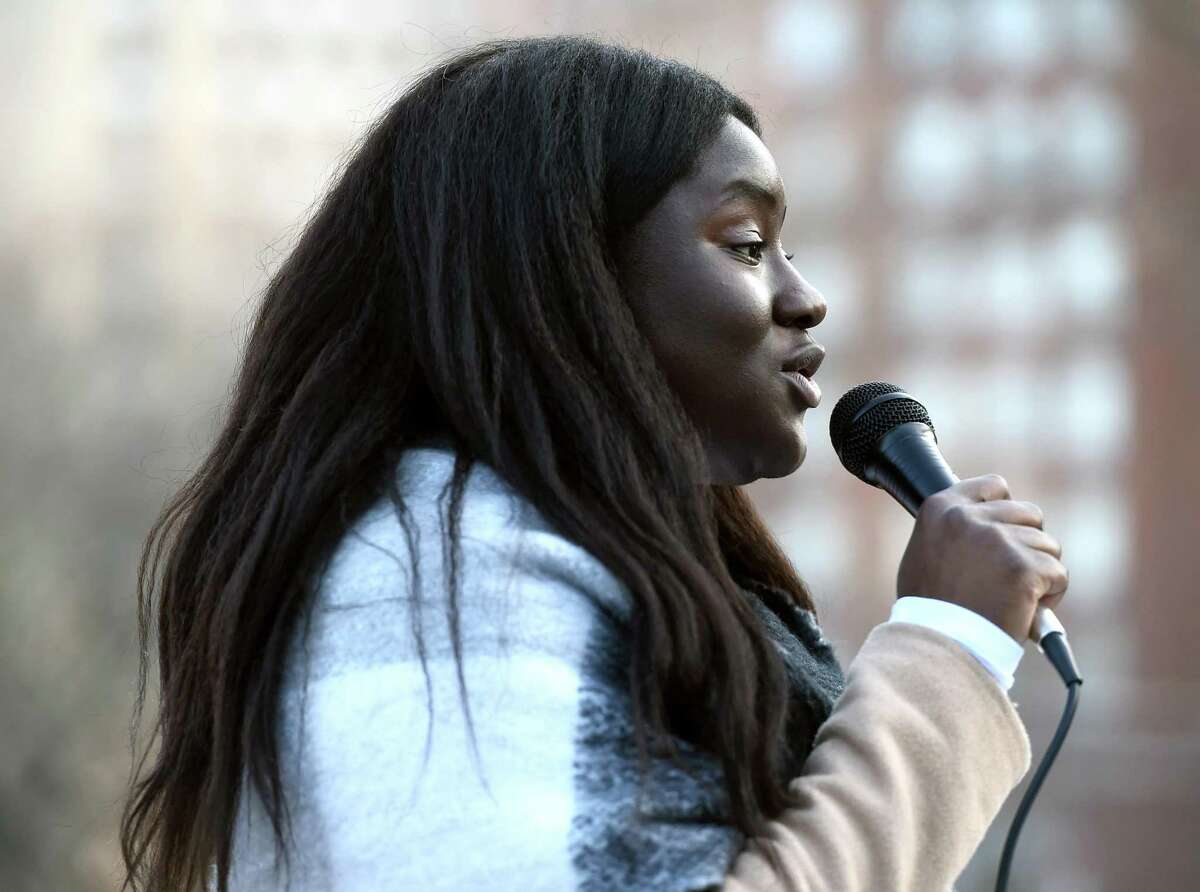 Jennifer Quaye-Hudson, external affairs director for Connecticut Voices for Children, speaks at a rally on the New Haven Green for more pay for child care workers and financial assistance for parents on March 15, 2022.

NEW HAVEN — About 300 early-childhood caregivers, parents and children rallied Tuesday morning in the city to call for fair wages and financial help for families and those who devote their careers to caring for preschoolers.

The “Morning Without Childcare” rally, among several held throughout the state Tuesday, closed many programs for two hours to call on the state to increase support by $700 million. Without the help for child care providers and families, parents can’t afford the services, and many leave the workforce in order to care for their children at home, organizers said.

Marina Rodriguez, senior director of All Our Kin in New Haven, said she was unable to afford the best child care 17 years ago, even with subsidies, which “to this day is a decision that haunts me as a mom, and an early childhood person.”

Rodriguez said families are still struggling to pay for child care and caregivers must take on second and third jobs. “Child care should not be something that families navigate alone,” she said. “Affordable, ideal settings for our children is a social and collective responsibility. We need change and we need it now.”

The $700 million would include $250 million to pay higher wages to staff, $170 million for health insurance, $200 million for the state-run Care 4 Kids program, which helps families pay for child care, $30 million for caregiver scholarships and loan forgiveness, and $50 million for facility construction and renovations.

“Eighty percent of families across the state of Connecticut cannot afford child care,” she said. “Sixty-two percent of child care programs across the state are operating at a loss. State-subsidized programs have not seen an increase since 2015. Ninety-eight percent of early-childhood educators are female, and a disproportionate number of them are Black and brown women. The average hourly wage is $13.45. The system is designed to pay women to live in poverty.”

The child care issue has caught the attention of state and federal lawmakers. At the national level, U.S. Rep. Rosa L. DeLauro, D-3, long has fought to expand the federal child tax credit to more families. She successfully lobbied to include the expanded tax credit in the 2021 American Rescue Plan

Monthly checks began going out to parents last July, but the payments stopped late last year with Congress’ failure to pass President Joe Biden’s signature domestic spending package known as Build Back Better, which would have extended the tax credit for one year.

Nationally, one in four families with young children who received the payments spent the money on child care costs, according to census data.

State Rep. Sean Scanlan, D-Guilford, has championed the idea of state child tax credit. He has proposed a credit of $600 per child, up to three children per family, for households making up to $200,000 per year, or $100,000 for single parents.

Pierre Bourgeois, whose sons Cruz, 6, and Pax, 2, attend Alphabet Academy & the Nest, where “they have created an environment where children can be truly themselves, which is to say honest, full of wonder and loving.

He pointed out that when the COVID-19 pandemic hit, many child care facilities remained open. “My wife is a nurse, and most recently working directly in the fight against COVID-19. If we had not had child care, not only would our family have suffered, but she would have had to stay home and the common good would have suffered.”

He said when the pandemic hit, “my son’s teachers welcomed the children with joy and love, creating a sense of calm and of normalcy, day in and day out.”

DeLauro, who could not attend the rally because she is ill with COVID, sent a statement saying the Child Care Development Block Grant was increased by $254 million to $6.2 billion, “but we have a long way to go. It is long past time that we create a new permanent child care system that recognizes our current one is simply broken,” she said in her statement.

Mayor Justin Elicker, whose daughters have attended Leila Day Nursery, said, “It’s abundantly clear right now when so many people have not reentered the workforce because they can’t afford to, because they need to stay home and take care of our children. Early child care is about the economy. Early child care is about jobs. And frankly, it should be about real jobs, and we need to pay people that are educating our young people a wage that actually respects the skill that they have and the care that they’re providing to our babies.